THIS BLOG HAS BEEN ARCHIVED AND IS NO LONGER ACTIVE.

THIS BLOG IS NO LONGER ACTIVE.


Please get your Mother's Day plants and flowers from the volunteers at Montclair Animal Shelter!


Jude will be selling flats and hanging baskets just in time for spring planting and Mother's Day.


Jude will set up right outside the shelter from


All proceeds go directly for supplies for our animals! 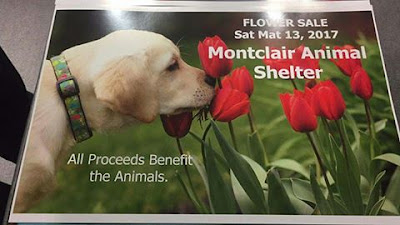 Do you know your local Animal Control Officers (ACOs)?

Well this is the opportunity to introduce yourself, shake some hands, and offer a smile to people who are very important to the health and safety of the pets and people in your community.

Here are some great reasons to say THANKS to your local Animal Control Officer!
As public safety officers, ACOs deal with dangerous situations on a regular basis to protect your community.

Rabies is under control in the United States because of Animal Control.  ACOs enforce the laws and statutes which protect people and animals from rabies and other life-threatening diseases.

ACOs help all kinds of animals in all kinds of trouble – those who are lost, sick, injured, starved, and abused.

ACOs also care for – and adopt out -- homeless pets who need shelter and new families.

ACOs provide information to residents about wildlife and domestic animals.

In any given week (or in a single day), an ACO may rescue a cat trapped in a wall, catch an injured raccoon and deliver it to a wildlife rehabilitator, relocate a native snake found in the wrong place, help a lost dog find his people (and vice versa), adopt a homeless cat to her new family, and testify in court against an abusive or neglectful pet owner.

ACOs are happy to speak at public venues, schools, etc about the importance of adopting animals from shelters vs patronizing puppy mill-supplied pet stores.

ACOs participate in and coordinate TNR programs within contracted towns and educate residents how to be an optimal part of the program to ensure cat populations do not grow exponentially.

Next time you see one of your local Animal Control Officers, make sure to thank them for a job well done!

We are open to the public daily from 12pm to 4pm.
Special appointment times by advance request only.
Come in to meet your new family member!
Please check our Facebook page for updates and announcements and Petfinder for a list of adoptables!
We have suspended our volunteer orientation program at the shelter until we are fully up & running again.
As usual, we are still honoring our Animal Control services within our contracted towns of Montclair, Nutley & Verona.